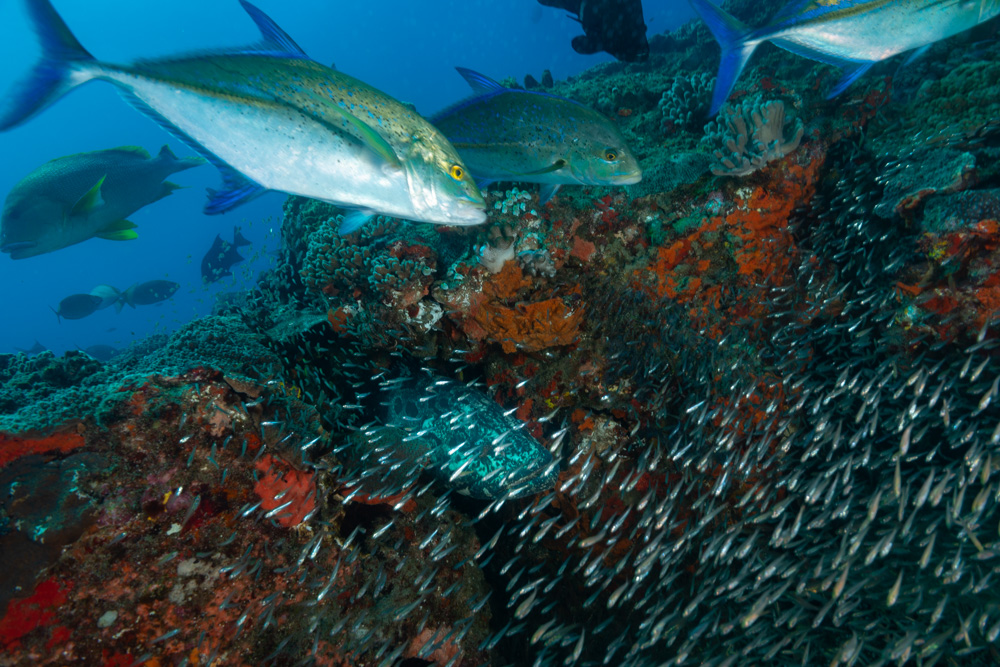 This March I was hosted by Gozo Azul in Mozambique and by Pisces Dive Charter & Retreat in Sodwana. On a number of occasions, I watched in awe as hunting packs of bluefin trevally caused chaos amongst the shallow reef fish, both in Ponta Malongane Bay, Southern Mozambique and also in Sodwana Bay, Kwa-Zulu Natal, South Africa.

There are a couple of fascinating characters in this unfolding story and so here’ s a little information about each of them.

The bluefin trevally (Caranx melampygus) is an apex predator on the reef system. It has an oblong body shaped like a bullet with a moderately steep forehead. The overall body colour is a glorious dark, dusky green with electric blue markings, especially along the dorsal fin base and the rear, straight region of the lateral line. The flanks and the dorsal surface are densely patterned with small, grey to black spots which are frequently iridescent blue. The Bluefin Trevally is also known as the bluefin jack, blue ula or spotted trevally.

The Potato bass or grouper is probably the most curious fish of all. While scuba diving on reefs on the east coast of South Africa and Mozambique you are almost guaranteed a close encounter with this massive fish, which commonly grow up to 1.5m in length – making them one of the largest of all the coral reef predators in the region.

The clownfish or anemonefish form symbiotic mutualisms with sea anemones and incredibly, are unaffected by the stinging tentacles of the host anemone. The sea anemone protects the clownfish from predators, as well as providing food through the scraps left from the anemone’s meals and occasional dead anemone tentacles. In return, the clownfish defends the anemone from its predators and parasites

in the next selection of photos, you can clearly see a stubborn potato bass (Epinephelus tukula).He was having none of it. Perched in a nook above his ever-moving larder of silver schooling fish, the potato bass refused to budge. He watched the mayhem with revolving protruding eyes and a slightly open mouth, showing off his rows of needle-sharp teeth in warning. A pair of clownfish were in a precarious position too and you can see them acting bravely in photo 5. I have watched the clownfish on this exact anemone, on this particular reef in Sodwana ( Stringer reef ) for more than 20 years. I found myself holding my breath and hoping that they’d be safe. They were!  I think there is something to learn from the resilience and bravery of the two clownies (Amphiprion allardi).

Grouped into tight little packs of 8-10 fish the aggressive fish moved fast and lithe, slipping silently about 30cm above the reef. At one stage a blue emperor joined them and the hunt quickened with the ferocious swallowing of a spiny starfish. The starfish must’ve tickled the throat, as the emperor quickly spat it out and then two of its legs which had been completely amputated in the frenzy. Luckily for the starfish, it was unpalatable and the band of trevally sniffed and left it to limp, trailing legs and other body parts,  into a crevice. I popped the two still moving legs down into the gap with it! Here in the next photos is the hapless spiny beast and you can clearly see the amputations and the damaged spiny starfish lying in pieces after having been spat out unceremoniously. Starfish re-grow legs though- so he’ll be fine!